Paganfest 2012 - Turisas at the Key Club 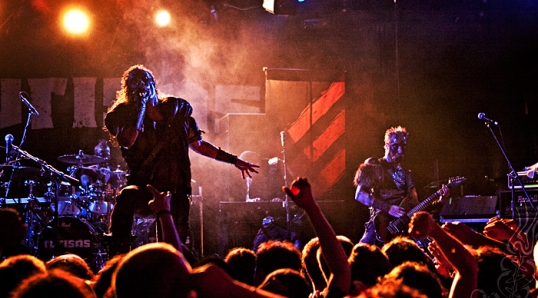 On Wednesday the 18th, Paganfest rolled through Hollywood, CA. Headlining the tour was the Finnish folk metal band Turisas with support by Alestorm, Arkona and Huntress. This was my third time seeing Turisas, but it was their first headlining tour of North America. Turisas was fantastic as usual, the crowd was super energetic and it was nice to get to experience an extended set from them. Special thanks to Century Media Records for hooking up the photo pass, photos of Alestorm and Arkona will be posted soon.

Turisas at the Fox Pomona

Turisas opened for Cradle of Filth during their “Creatures of the Black Abyss” tour when they stopped off at the Fox Theater in Pomona, CA. I was especially excited to photograph Turisas because I’ve been waiting for them to come back to the states for a few years now. Ever since I saw them open for Ensiferum back in 2007 I’ve wanted to shoot them. They put on an awesome show and was definitely not disappointed. Turisas is currently promoting their new album Stand Up and Fight which was released on March 8, 2011. I’ve given it a few listens and so far it has turned out to be a pretty good album.